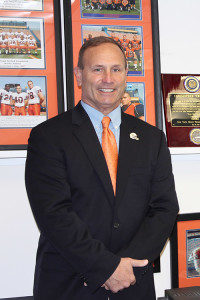 Chris is a product of Freeport having graduated Freeport High School in 1974, the same year as his lifelong friend and current business partner, Bill White. Chris went on to Gettysburg College receiving his Bachelor’s degree in Political Science in 1978. At Gettysburg, he was a two-sport athlete and senior captain of the football team. He remains active with his alma mater serving on the Orange & Blue Club Athletic Department Board of Directors for eleven years. He is currently the Long Island Recruiting Coordinator for Gettysburg’s football program and has recruited hundreds of student-athletes including 10 Captains and many All-Conference and All American student-athletes. He received the prestigious Meritorious Service Award for his contributions to the program in 2008.

While developing culture at White & Re’ that stresses community service he has achieved leadership positions in numerous charitable organizations. Chris has been recognized as Kiwanis Club’s Citizen of the year and is a Past President of the organization. He is a recipient of the Martin Luther King, Jr. Freedom Award and Freeport PTA’s Lifetime Achievement Award for his work with youth organizations. Chris is a founding Board member of Freeport’s Dollars for Scholars and Massapequa’s Youth Lacrosse Club. Chris has also served on the Board of Directors of the Nassau and Suffolk County National Football Foundation. He has volunteered as a coach and mentor from the youth to high school level and retains a passion for developing student-athletes across Long Island.

​Chris resides in Massapequa with his wife, Christine. Chris and Christine have two children. Son, Thomas, graduated from the United States Merchant Marine Academy in 2014 and is currently serving his country as a Second Officer with the Military Sealift Command. Daughter, Alicen, is attending the United States Coast Guard Academy and is scheduled to graduate in 2019. Chris has been in the insurance business since 1980 merging with William H. White Inc. in 1987. White & Re’ Agency is widely recognized in the insurance industry for “taking the insurance business to the next level.” At White & Re’ we truly are Long Island!

Send us a message, we will get right back to you.