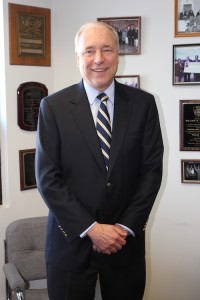 Bill White is a native Freeporter and a 1974 graduate of Freeport High School.  He attended Colgate University in Hamilton, New York, where he received a Bachelor of Arts in Economics in 1978.  He returned to his hometown after graduation and went to work in the family insurance agency.  He purchased the agency in 1982.

One of Bill’s priorities in the management of the William White Agency was to provide the client with superior customer service once the sale was consummated.  He accomplished this by hiring qualified and competent staff.   As a result, Bill’s agency enjoyed customer retention levels far in excess of the industry average.

On February 1, 1987, Bill and his lifelong friend Chris Re’ merged their respective businesses to form the WHITE & RE AGENCY.  Since then, the firm has grown to be one of the leading property and casualty agencies in Nassau County.   Their philosophy has remained the same:  To secure responsible insurance, at a reasonable premium, through superior insurance carriers.  And, most importantly, to continue the decades-long tradition of providing exceptional service!

In April 2010, Bill received the National Flood Insurance Program Community Rating System Award for Excellence at its annual meeting in San Diego.   This was the first award of its kind, given nationally to the individual who has provided leadership in the area of promoting the National Flood Program and alerting residents to programs for flood mitigation in their community.

Bill is active in the business community.  He served as a Director of the Freeport Chamber of Commerce for 25 years.   In October 2002, he received  Freeport’s Businessperson of the Year Award by the Nassau County Council of Chambers of Commerce.  He was honored by the Freeport Chamber at its annual golf outing in 2004.  The Chamber subsequently honored White & Re in 2009.  He is Past President of the Exchange Club of Freeport, an International Service Organization focusing on child abuse prevention.  He has served on the local Salvation Army Advisory Board.  He also has served on the Directors Advisory Council for The De La Salle School, a school for young men in grades 5 – 8.   In 2013, the Freeport Little League presented Bill with its Lifetime Achievement award.

Bill served his community for 17 years as an elected member of the Freeport Village Board of Trustees.  He was Deputy Mayor from 2014-15, retiring from the Board at the completion of his fourth term in April 2015.   Prior to that, he was a member and Deputy Chairman of the Zoning Board of Appeals for 13 years.

Bill resides on Freeport’s fabulous waterfront with his wife Elizabeth and family.

Send us a message, we will get right back to you.